We receive and spread an update:

The fourth trial against Revolutionary Struggle for the charges concerning robberies, some of them attributed to the organization, will continue on Thursday 5th September 2019 at 9:30am. As known, the trial will take place in the courtroom inside the prison of Korydallos. 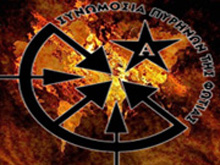 On Wednesday, 24.07, anarchist comrades Christos and Gerasimos Tsakalos, members of the Conspiracy of Cells of Fire were released. The comrades were originally convicted with sentences of over 70 years, which were reduced to 20. The comrades made use of the Paraskevopoulos law that was introduced by the previous SYRIZA-led government and were released after having served 8 years of their 20 year sentences.

After their arrests they claimed full responsibility for their actions and proclaimed themselves “proud members of the Conspiracy of Cells of Fire”. During their imprisonment in Korydallos prison, the CCF claimed responsibility for Phoenix Project actions, including the bombing of the Prison Director’s car as well as sending a parcel bomb to the former head of the anti-terrorism unit, Dimitris Chorianopoulos.

Nikos Romanos is finally free He was released on 11/7/19, from Korydallos Prison in Greece, having served the sentences imposed on him.

The comrade was arrested in February 2013 along with three other comrades for a double armed robbery, at the Agricultural Bank and the Hellenic Postbank in Velvento, Kozani.

As an act of revenge the comrade has been transferred to the basement of the women’s prison of Korydallos in Athens  in order to attend the ongoing trial for the “Thieves of Distomos” case.

The transfer service recorded him as a prisoner to the men’s prisons of Koridallos. At this time he is being irregularly imprisoned in another prison and in a special detention regime with a ban on visits and deprivation of basic formalities, since he is typically “invisible”.

The involvement of the anti-terrorist police is evident in this event and reveals its fury towards unrepentant militants such as Comrade Kostas Sakkas by deciding on the transfer of detainees judged to be “particularly dangerous”.

NO COMRADE IN THE HANDS OF THE STATE

Text from Gannis, Kostas and Dimitra, from the dungeons of the General Police headquarters 16/6/2019

Updates 13.6.19, about the arrests of 3 anarchist comrades during an expropriation

About the arrests of 3 comrades during an expropriation