By accepting to be the general contractor for the new Laval migrant detention center, Tisseur Inc. made a grave mistake. On the night of October 26th we decided to make our contribution to the struggle against the system of borders and prisons in all its forms. We set fire to a truck on the banks of the Lachine Canal, on the site of another Tisseur project. We’re not done.

Freiburg, Germany: Burn All Prisons and Those Who Build Them

During the night of Thursday, 24.10.2019, an Implenia Group company car was torched on the Tullastraße in Freiburg im Breisgau. Implenia is one of the largest construction companies in Switzerland and is internationally active. In Switzerland, the company is famous for the construction of the Bässlergut deportation prison. The Bässlergut is a prison with a penal system and deportation detention directly on the border with Germany. As part of the new legislation, part of it has now been converted into a so-called federal camp. These are further steps in the authoritarian management of refugees in Switzerland, in which the mass processing of people takes place in a centralized manner. Registration, administration and deportation is the motto.

Implenia is currently building an extension of the prison and is thus making a direct contribution to the expansion of the federal prison system. Over the past two years, Implenia has therefore repeatedly been the target of actions directed against a world of walls and borders. Unfortunately, these actions remain isolated in Switzerland and individual cities such as Berlin. We would like to spread this fight, draw attention to it and motivate more groups to focus on the prison profiteers.

The Squatting Days are currently taking place here in Freiburg. Houses are occupied and the profiteers of vacancy and gentrification are shown that they can no longer continue their inhuman work undisturbed. Whether it is repression through revaluation and eviction or through justice and imprisonment, the logic behind it is always the same.

Fiery greetings to the Anti-Prison Days in Berlin and Warsaw and to everyone behind the walls! 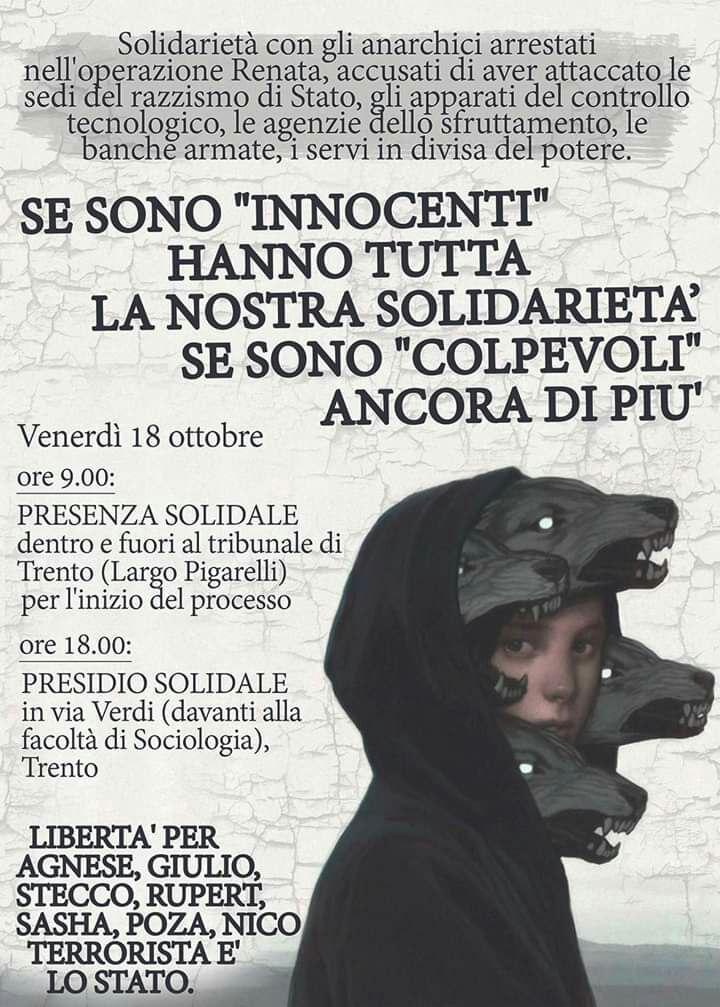 Solidarity with the anarchists arrested for the “Renata” operation, accused of attacking the headquarters of State racism, the apparatus of technological control, the exploitation agencies, the armed banks, the servants in uniform of power.

Friday, October 18, 2019
9.00 am: Presence of solidarity inside and outside the court of Trento (largo Pigarelli) for the start of the trial.
6.00 pm: Solidarity gathering in Verdi street (in front of the Faculty of Sociology), in Trento.