Chile: Statement by Anarchist Prisoner Marcelo Villarroel on the 10th Anniversary of the Death of Mauricio Morales 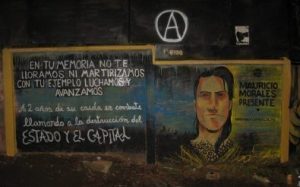 10 years after the death in combat of Mauricio Morales …

To all those who confront the present from autonomy, with insurrectionary memory, in resistance and subversion!

10 years ago Mauricio Morales Duarte, the punky Maury died. One night at the end of May, a rumble was heard, in the vicinity of the south center of Santiago, in the gendarmerie school the punky Maury departed in his eternal bicycle to the route of all those who have lost their lives in this everyday exercise of struggling to be free by confronting the domain in all the spaces of reality.

At that time, I was a prisoner in unit 11 of Neuquén, Argentina, when on a cold May morning, I learned what had happened. The inevitable pain of loss was multiplied by anger and pride. Your choice of life in struggle as a contribution to the anarchist and insurrectional tension as an expression of social war earned my repeated respect.

10 years since then, the remembrance of your history and the memory of your actions are expressed as part of our arsenal of life in conflict that everyday we carry in all the most unsuspected corners on the planet… it has already been said many times by comrades around the world speaking different languages, but the same language of war in eternal complicity with those who attack power, prison, hierarchies, the police and all authority.

We always share your words and history, we make you talk with those who died before and dance the same wild melody of the attack. Memory, Resistance, Subversion is our insistence that contains all the experiences of struggle and direct conflict including by those we do not know but we know nevertheless… the struggle for total liberation is dispute and daily conflict in all spaces of reality.

And for that reason I encourage the proliferation of the initiatives that set out to destroy the existing order and certainly your example walks between us without any doubt. From the high security jail of Santiago in Chile, I greet all those who make this activity possible and to all of those that decided to move to attack against this rotten world in which today we survive.

On the third day of hunger strike …

MAURICIO MORALES PRESENT IN THE FIGHT OF THE LIBERTARIAN AUTONOMOUS SUBVERSION!!

AGAINST THE STATE, THE PRISON AND CAPITAL: SOCIAL WAR!

WHILE THERE IS MISERY THERE WILL BE REBELLION!!

« Italy : Anna, Silvia, Nat – “A throw of the dice” – (Prison of L’Aquila)
Argentina: Anarchist Comrades Released from Jail as All Charges Dropped »