Comrade Malik Speaks! This Also Means That I Am an AntiFascist! Expect Us!

By now the word has gotten out that I’ve left the New Afrikan Black Panther Party-prison chapter and embraced Anarchism. This is a tough time but as J. Cole raps in his song “Middle Child,” he says: “Everything Grows, its destined to change!” I have changed!

I am still holding on to my belief in Eco-Socialism. Plain and simple, climate change is real and not a hoax. Think many of ya’ll who have felt these unusually hot temps recently can attest that something is most certainly going on and I can guarantee you that these imperialist multi-national corporations that deal in fossil fuels have no interest in saving our beautiful planet or ensuring that the humyn species is able to survive– they just don’t care so we have to make them care! But that is not why I am communicating with you today!

I am here to confront that fascist and white supremacist in the Oval Office in Washington, DC. The man who has unleashed these Neo-Nazi haters masquerading as so-called ‘patriots’ who are chanting “send her back” and attacking unsuspecting wimmin and children of color! END_OF_DOCUMENT_TOKEN_TO_BE_REPLACED

France : Letter from Anarchist Prisoner Embers, Imprisoned Since May Day in Paris

It was never the hammers in the trunk of the car, as much as the new world in the heart, that scares them and that is why I write today from a cell.

After being arrested in Paris on the eve of May 1 and spending three months in detention, orchestrated by the hunting grounds, the prosecutor who accuses, the judge who questions and the press that condemns, the possibility of my release has been canceled by the prosecutor because he thinks there is a risk of recidivism and because of my determination not to give up. They expect me to say that I accept that violence belongs to them, to condemn before their pressure the actions of comrades and the riots. They ask me about what I have in my head, and if I refuse to answer it is due to what lives in my heart.

The prosecutor explains that the guarantees offered for my release on “liberty” under judicial control do not ensure an environment that could “de-radicalize me” and that is why I must remain in prison.

And I wonder how it is that this being the place where the massacres of the State and its servants, of capitalism and its ravages so clearly manifest, how is it that one of the visible faces of its violence could make me stop dreaming of its complete destruction.

END_OF_DOCUMENT_TOKEN_TO_BE_REPLACED

Comments Off on France : Letter from Anarchist Prisoner Embers, Imprisoned Since May Day in Paris   |  tags: Embers, france, May Day, Paris | posted in Interview with comrade/communique

Tom Manning’s death on July 30 has me in the grip of an emotional riptide. I feel like part of me died with him.

Tom was imprisoned at USP-Hazelton, WV at the time of his death. The ostensible cause of death, according to the Federal Bureau of Prisons, was a heart attack.

I received Tom’s last letter on July 15. He wrote that he was in dire circumstances, his medical needs treated with deliberate indifference, delays in receiving necessary medication, his body weak from lack of oxygen. Supporters scrambled to get a lawyer in to see him, but death arrived first.

Tom battled the Bureau of Prisons’ criminal negligence of his medical needs for the past 10 years, beginning when he almost died from an untreated knee infection while at USP-Coleman, FL. As a result of that infection, most of his knee was surgically removed and he was wheelchair bound for the rest of his days.

But he was not through fighting.

When he arrived at FMC-Butner, NC for further medical treatment he was kept in solitary confinement under abysmal conditions for 3 years. Much-needed knee and shoulder surgeries were repeatedly delayed until pressure from Tom’s supporters forced the BOP to act. But the surgeries came too late, and combined with the lack of necessary rehab insured that Tom remained in a wheelchair.

Tom always had the warrior spirit, right to his last breath. Many more like him, and the ruling class would tremble. The ache in my heart over his passing will be forever.

END_OF_DOCUMENT_TOKEN_TO_BE_REPLACED

Italy: Communique of Alfredo Cospito from the prison of Ferrara

Alfredo, from the prison of Ferrara, asks for this short communiqué to be circulated, excusing himself for not having done so earlier but he was completely isolated in the hospital. He sends a hug to everyone.

Prison of Ferrara, 14/07/2019
“I give you the tragicomic news that after 5 hours’ operation my bloody gall bladder has abandoned us (July 8) due to the hunger strike. Excuse me but I still can’t answer your many letters decently. But count on my answers. The only positive thing is that I have lost 21 kg.

Keep on writing to me.

Sure that the struggle in solidarity with the comrades proceeds ever more effectively.”

Translated by Act for freedom now!

Comments Off on Italy: Communique of Alfredo Cospito from the prison of Ferrara   |  tags: Alfredo Cospito, Ferrara, Hunger Strike, Italy | posted in Interview with comrade/communique

The following text is from the second part of “Which international? Interview and dialogue with Alfredo Cospito from the Ferrara Prison,” part of a debate that some comrades are undertaking with imprisoned anarchist comrade Alfredo Cospito, published in winter 2019 in the anarchist newspaper “Vitriol” in Italian. 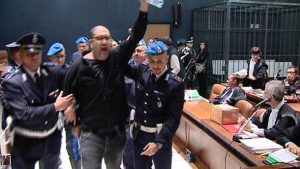 Analyzing the history of the movement of the exploited, of the poor, oppressed and proletarians, we see that anarchist ideas are born, nourished and developed in these contexts; on the other hand, most of the anarchists also come from there (of course there are also exceptions). These ideas were born mainly during the birth and growth of industrial capitalism (indicatively from the early 1800s to the 1970s), and up to 40 years ago, the organizations of the exploited and of the workers are mainly mass and the anarchist groups (and the individuals who are part of them) are also the fruit of that historical era. With the advent of capitalist restructuring in the 1980s, followed by a drastic change in the world of work, even anarchist action and organization undergo changes; to the classic organizations of synthesis (or mass), the less rigid structures, based on affinity and informality, are opposed. The new technological restructuring, based mainly on robotics will obviously lead to other drastic changes (mass unemployment) and the new proletarians will probably be employed in moving goods. In this context, in which the impoverishment of the proletarians (and obviously the exploitation of humans, animals and land) and the wealth of the exploiters will increase, does it still make sense to talk about class struggle? Are there still margins to involve – in the struggle for the destruction of this techno-industrial civilization – the exploited, the proletarians, the excluded? Should we try or renew forms of struggle organization? END_OF_DOCUMENT_TOKEN_TO_BE_REPLACED

Putting Ideas on Trial: The Greek State’s Laboratory of Repression

After several failed attempts across Europe to frame anarchists and other anti-authoritarians with conspiracy and terrorism charges, the Greek state is at the forefront of developing new legal strategies to attack social movements. Article 187A of the Greek legal penal code has existed since 2004, but last year, Greek officials used it in a new way against Nikos Romanos and several other anarchist prisoners, convicting and sentencing them to many years in prison based on a new interpretation of the article. Regardless of whether these verdicts are overturned in higher courts, the trials indicate a major strategic shift in the policing of social movements in Greece. They offer an important warning sign about the new forms that repression may assume around the world as social conflict intensifies.

I am anarchist, I am not feminist because I see feminism as a sectorial and victimist withdrawal, I have never made any gender discrimination although I don’t use gender-friendly linguistic conventions, on the contrary I often use dirty politically incorrect language. I think that the annulment of gender privilege and similar oppression is already contained in the search for anarchy, that is to say in the practice of anti-authoritarian relations, and should be cultivated there. Ah, I forgot, I loathe consciousness-raising in public meetings and I also consider assemblies to be blunt instruments. I understand and also have the will to meet. But I see how all too often the assembly degenerates into sterile self-representation.

You see nowadays you risk having to start off with such a preamble in order to enter the thicket of clichés on gender and feminism, disentangling yourself in the intricate incapacity to relate to the anarchist galaxy, with a range of behaviours going from hyper-emotiveness to the bureaucratic calculation of what stand (and degree of negotiable compromise) to take in a struggle. I don’t think that authoritarian and sexist behaviour can be fought by trying to spread new linguistic conventions or by cooking up shreds of mainstream indignant rhetoric (among which #nonunadimeno [enough is enough], the feminicide count on TV, pride, red shoes and rainbow ribbons) in an alternative sauce.