Anarchist comrade and long-time antifascist Willem Van Spronsen has been fatally shot by cops in Tacoma following an armed attack against the repressive, dehumanising and degrading incarceration policies of ICE (Immigration and Customs Enforcement) at one of the growing number of US State institutional concentration camps.

69 year-old Willem valiantly attacked the institution on his own with incendiary devices and a home-built AR15 rifle, knowing the likely outcome of his actions.

He successfully set one vehicle on fire and then exchanged gunfire with Tacoma police officers who fatally shot him. He was pronounced dead on the scene.

A communique was released by Willem prior to his liberation attempt outlining his clear critique of the ‘visible fascism ascendant’ and a surprising appeal to American patriotism in the unabashedly, brutal face of the capitalist corporate state.

His actions will not be forgotten and it remains to be seen if his resolve and determination will be translated into other actions against the slide into fascism by the US state. 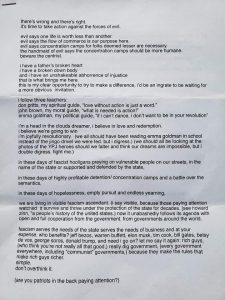 Full final message and communique available to read via anarchistsworldwide.noblogs.org

I am not affiliated with any organization, i have disafilliated from any organization who disagree with my choice of tactics.
the semi automatic weapon i used was a cheap, home built unregistered “ghost” ar15, it had six magazines. i strongly encourage comrades and incoming comrades to arm themselves. we are now responsible for defending people from the predatory state: ignore the law in arming yourself if you have the luxury, i did.