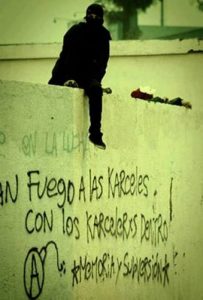 It was in the second half of the ‘90s that the subversive reality began to change definitely as well as the ideas of forces that serve as references and guides for action. END_OF_DOCUMENT_TOKEN_TO_BE_REPLACED

Chile: Communiqué of the prisoners of the Carcel of Alta Seguridad

Today Thursday, May 30, we are ending the hunger strike after 14 days. We started it in 23 prisoners locked up in section 3H north of this unit, and in the days that followed the hunger strike saw the participation of different sections, reaching a total of 32 prisoners, as a concrete manifestation of the refusal of the application of the amendment to Legislative Decree No 321, concerning parole.

We believe that this struggle requires the attention, resolution and the dedication of all the imprisoned concerned, as well as their families, their organizations and their people who see prison as an instrument of discipline primarily aimed at criminalizing poverty and supported by an ever more repressive legal framework, the aim of which is to keep social order in the service of the powerful of this country.

As part of the national mobilization of prisoners and those accompanying and supporting us against this perverse modification, we declare a state of permanent mobilization, since it is with the silence and the complicity of the politicians of all colours sitting in Congress, judges and lawyers who justify and the State as a whole, under the Piñera government [Sebastián Piñera, the Chilean President; NdAtt.] who, behind the backs of the small people, have used legality in violation of the treaties as well as principles of their own law, which they claim to defend. END_OF_DOCUMENT_TOKEN_TO_BE_REPLACED